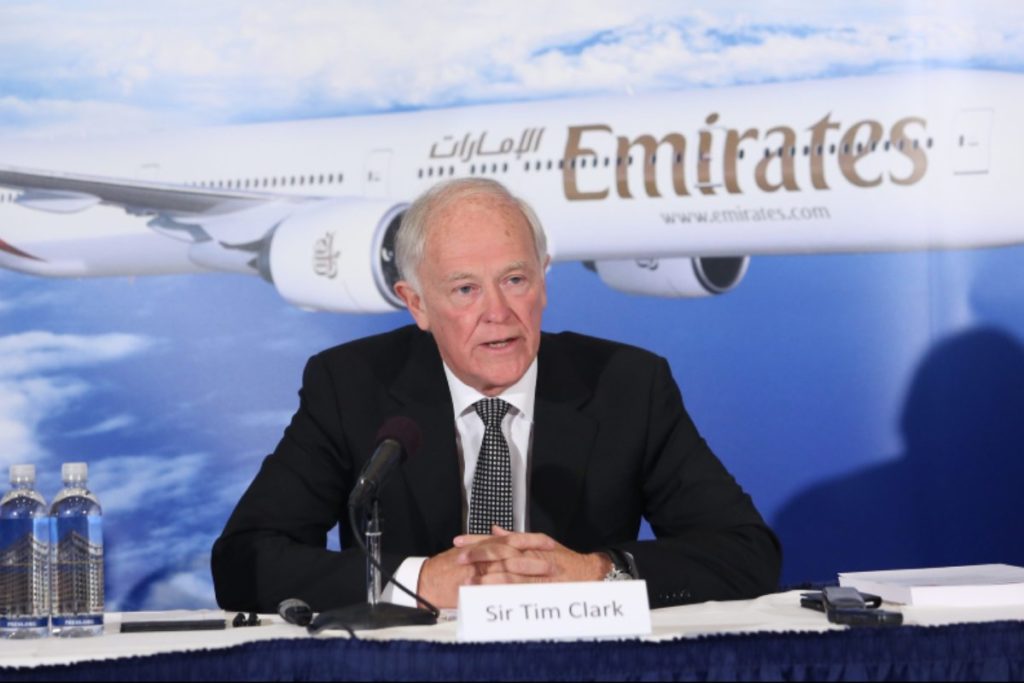 Given the Dubai-based airline’s aircraft on order, Emirates President Tim Clark is dissatisfied with both Airbus and Boeing. Unfortunately, given that global commercial aircraft manufacture is virtually a duopoly, I’m not sure he has more he can do.

Emirates now has a fleet of around 250 aircraft, all of which are Airbus A380 and Boeing 777 aircraft. With the conclusion of Airbus A380 production and the current generation of Boeing 777s becoming obsolete, the airline is looking to other aircraft to renew its fleet.

The major problem is that Emirates’ future delivery planes are all uncertain at this point in time, and that is a major challenge for the airline.

Tim Clark, the President of Emirates, revealed his frustration in an interview with Airlineratings regarding the number of planes the airline has on order.

The Boeing 777X is the most pressing concern, as it will serve as the backbone of Emirates’ fleet in the future. The current situation with Boeing is described by Clark as “a complete mess.” The delivery date of April 2020 for Emirates’ first 777X has been severely pushed back. By the middle of 2023, Boeing hopes to have the 777X certified for use. Clark isn’t sure about the exact date of the event.

Emirates is facing long delays on all new aircraft it has on order, including 50 A350-900s. Airlinerating asked the following questions to Mr Clark:

Emirates fears a shortage of aircraft and crews for the time after the pandemic. What is it about?

Tim Clark: We have to look beyond Covid if we want to stay in business. We do see some holes appearing in our plan in 2024/2025.

We try to deal with it by extending aircraft lives and trying to advance some of the new aircraft, which currently will only come from 2024. Life extension will affect about 120 aircraft, 80 of them A380s, plus about 40 or 50 Boeing 777-300ERs. The exact numbers haven’t been fixed, and it’s a moveable feast.

Their life will be extended by six to ten years each. Our first A380, A6-EDA, went out of service after 13 years, but these aircraft can fly much longer as long as you support them. We had six A380s come in last year, and if you give them a 15-year life, we are into the mid-2030s anyway.

The other ones we are going to extend have plenty of legs in there. The A380 is designed for 19,000 cycles, and we have to persuade Airbus to extend the life to 25,000 or even 30,000 cycles. I am sure there won’t be a problem with the regulators.

That allows us to get meaningful life out of them. The ones we already decommissioned didn’t get anywhere near that limit. And I’m sure there won’t be any technical obstacles doing it.

But would that fill your capacity needs in the long term?

Our single biggest worry in the next decade, not that I will be around for it, is what happens at the super hub here when the A380s are gone, going up to 120 million passengers a year at Dubai International, after pushing 92 million in 2019.

Together with Dubai World Central (DWC) being able to handle 30 million additional passengers a year, we could cope with up to 150 million in total over both airports, even without building the big one in DWC. But currently, no manufacturer is looking at the development of big new aircraft to possibly replace the A380.

I told Airbus CEO Guillaume Faury recently that they need to look at that, but currently, they don’t. There will be a big gap in the market at the upper end, and hydrogen-powered aircraft won’t be the solution.

What impact does the new role of the FAA in certifying the Boeing 787 have on your delivery schedule?

The FAA wishes to personally certify every aeroplane. In the old days, you thought that’s what was happening, but then they delegated certification to our friends at Boeing. Whereas it was taking X amount of time to take delivery of an aeroplane, that is probably going to quadruple now because the FAA wants to go in and do everything themselves.

If you do all the ultrasound work on every single 787 rather than taking samples of a batch, that is slowing the production line immensely. You have to ask why is the FAA doing this, and what will happen to the 777-9 with everything being new, so what are they going to do on that?

Where are you with Boeing right now?

We had multiple meetings with them, and we need to sort out this contract by the end of February, as it is a complete mess. We don’t want to cancel the 787s or the 777-9s; we want the aeroplanes. What is going to happen when the A380 goes? What am I left with? But we want the aircraft in the shape that the contract requires.

The total of 30 787s in there look very marginal now as they are so far behind in production. They were supposed to come in May 2023. But it’s not going to happen; how can they deliver? Look at the huge backlog; they haven’t produced any aircraft; lately, that’ll take them two or three years to go over that.

They got production and quality control issues that they admit, and now after the MAX crisis with the regulator saying, ‘we want to have a good look at everything, that is slowing the whole thing down.

What’s your current understanding of progress with the 777-9 schedule?

In Boeing, we have twelve production aircraft of the 777-9 that have been produced already for us, and they are in storage without their engines. But because of the certification issues and the remedial work that must go into the FAA’s and EASA’s requirements, I don’t know where it’s going to end, and I just don’t have visibility on that.

So that aircraft is not due to be certified into July 2023; if they are lucky, they’ll get it; if not, it will go on for another six months or a year. We try to get Boeing to be as honest as they can, and I asked them: ‘Are you on track for certification in July 2023?’ and their response is ‘Yes, conditional’.

That’s not going to alleviate your concerns…

Honestly, if it goes beyond 2023 and it goes on for another year, we probably cancel the program. What else can we do? We can’t continue the way we are. Boeing really needs to get their act together and get this aircraft sorted. Don’t forget – the aircraft was originally designed for delivery in April 2020; it’s now 2024 if we are lucky.

You’ve now got a four-year delay with the program. If they have another year on it, we are going to question if this is fit for purpose or not; what’s the problem with it? I hope it doesn’t happen, as there is nowhere else we could go. They are building the biggest aircraft, and we want it. It was done at our request back in 2010; I don’t even want to think about it not happening.

How are the preparations for entry into service of the 777-9 progressing?

Boeing is going to be here in Dubai with the 777-9 in the summer of this year, and they are contracted to do a lot of testing under hot and dusty conditions; both Boeing and GE have agreed to do it, we want to subject the engines to high thrust levels at maximum take-off weight and the dust and heat at low-pressure altitudes that we have in the summer, that really works the engines hard.

Then we will watch the engines being stripped and broken down to see where the wear and tear are and satisfy ourselves that the engine is good for its purpose. All that is going ahead, and I am assuming that we’ll get there. Boeing still believes they can make July 2023, notwithstanding the things they know about today.

What does your delivery schedule for the 777-9 look like once it gets underway?

Boeing told us: ‘Once you got these twelve 777-9s already built, we can’t deliver anymore to you until 2025 due to our production program.’ I said to them, ‘We need them; you have to rearrange yourself.’ So, they went away to look at what they could deliver to us in 2024 in addition to the other aircraft. They then told us they could just deliver three to five of the aircraft already built to us in 2024.

What do you think of the A350 paint issue that Airbus and Qatar Airways are fighting out?

Fact is, it is an issue. I am not unsympathetic to Qatar Airways. We made it absolutely clear in Toulouse now that if we have the same problem on one of our aircraft, we won’t take them over. Akbar Al Baker told me, not sure if it is true that there were aircraft that hadn’t been delivered yet, that were also showing signs of that problem.

Akbar is a bit like us, and he probably learned from us that we would not accept anything but perfection. That’s not unreasonable, isn’t it? Our engineers looked at these A350s and said they were not in good shape. So, we say to Toulouse: By the delivery of the A350, you will have cracked this problem; otherwise, you will face us with no deliveries either. I think Airbus is in a transitioning period of tests; clearly, they miscalculated what the UV or temperature or whatever it may be can do.

They must resolve it as quickly as possible. The 787 also has the same kind of problem, but not as bad, for example, on the wings at Etihad. They might open the electro induction mesh, so the paint adheres to all of this better. They’ll have a solution to deal with the problem. How that deals with the High Court case, I have no idea.

Emirates To Resume Daily A380 Service To Brisbane