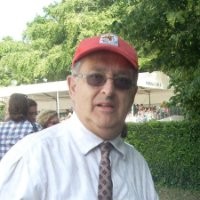 Malcolm Ginsberg, in a lengthy and very active career, is a successful public relations practitioner, publisher and writer, specialising in transport and travel. Starting out as a motor racing reporter, he was headhunted by Lotus Cars (at the time World Motor Racing Champions) to become press officer and later publicity manager, helping to sell the Elan, Elan +2, Europa and Lotus 7 (now Caterham 7).

In 1973 he founded Malcolm Ginsberg & Associates (MGA), public relations consultants, with Moonraker Boats (owned by Colin Chapman of Lotus), Clan Cars (essentially a Lotus spin off), Piper Aircraft and CSE – The Oxford Air Training School, as his first clients. CSE introduced Embraer to the UK and won the RAF order for the Tucano trainer. HeavyLift Cargo Airlines, no longer with us, its name is now part of the vocabulary, was another decade-long client. MGA has acted for American Airlines, All Nippon Airways, British World Airlines, Monarch and for 15 years Brymon Airways, plus Luton and Belfast Intentional airports. Sir Roy Watts, the former CEO of British Airways, retained MGA when he became chairman of Thames Water plc. Malcolm gained various awards for his public relations work, these mainly concerning his efforts on behalf of London City Airport in its early days.

Malcolm has been involved with London City Airport since the idea was conceived and has published LONDON CITY AIRPORT – 30 Years serving the Capital – ISBN 978-1-900438-07-0 the authoritative book on the airport. He was a founder member of the Aviation Club of the United Kingdom and an active committee member.