Has Travelport’s GDS business fallen too far behind? 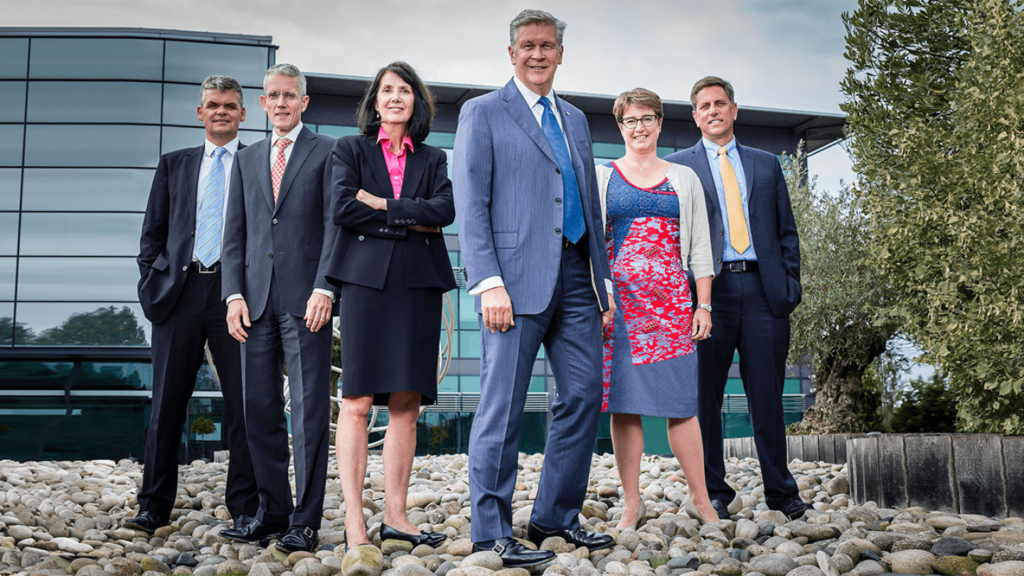 The GDS business is one that has had many critics and its demise has been predicted since the late 90’s. Yet GDS’s have thrived and consistently posted attractive growth and earnings.

Travelport last week reported 1Q earnings and took a big one on the chin reporting negative bookings growth. Already the smallest of the GDS, the company was bearing the brunt of the Flight Centre loss to Sabre and Amadeus. The bad news didn’t stop there:

And while revenue and earnings disappointed, expense increases intensified the pain:

There were some bright spots with revenue increasing 4% and the Beyond Air business growing at 22%. Inside the Beyond Air numbers, eNett was a shining star posting 81% growth attributed to share of wallet gains with Travelport OTAs in Europe and Asia.

Every industry evolves and it’s important to stay alert to signals that indicate a real shift. Having a GDS report negative bookings growth is definitely worth a look. Gordon Wilson, the Travelport CEO, dismissed the performance challenges attributing them to the loss of a large agency customer (Flight Centre).

During the call, Wilson and CFO Bernard Bot repeatedly referenced performance numbers excluding recent large customer losses. The problem is the loss can’t be excluded – it’s a loss and the bookings are not coming back. Big customer GDS volume shifts are rare.  The last one was the shift of a material volume by Expedia from Sabre to Amadeus in 2012. The loss of Flight Centre is a seminal moment for Travelport and for the GDS industry.

Is an increasing smaller GDS sustainable?

To keep things in perspective let’s do a quick landscape level set using Q1 data. Travelport has struggled since its creation by Cendant merging the assets of Galileo, Apollo and soon thereafter Worldspan. 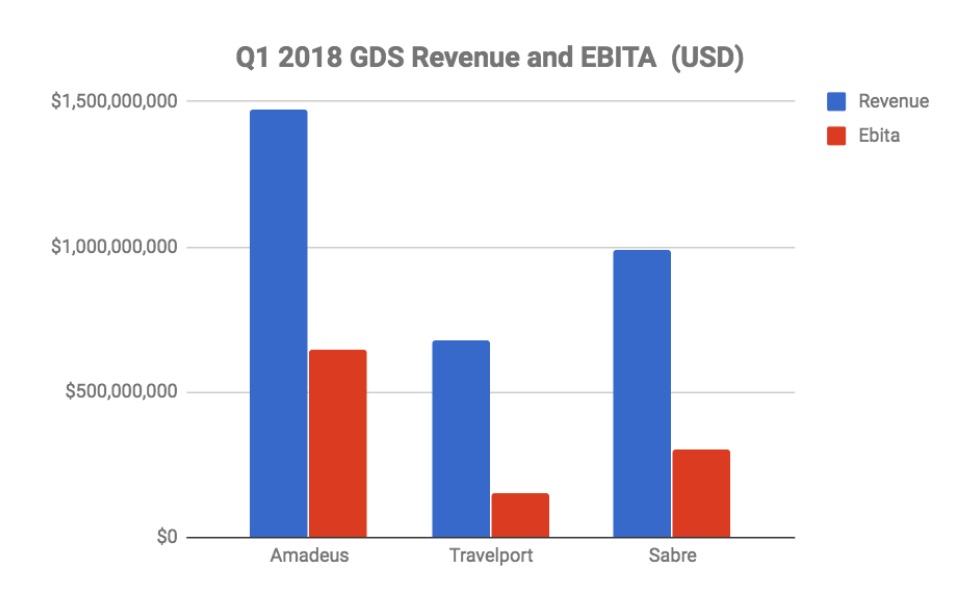 They have slowly and consistently bled market share since 2006. Initially, Amadeus was the primary beneficiary, but more recently both Sabre and Amadeus have been benefiting from Travelport’s decline.

Travelport did more GDS bookings in Q1 2012 than Q1 2018.  While revenues have continued to grow the GDS revenue growth has been driven by price versus volume increases.  Sabre and Amadeus have increased price and volume materially over the same period. 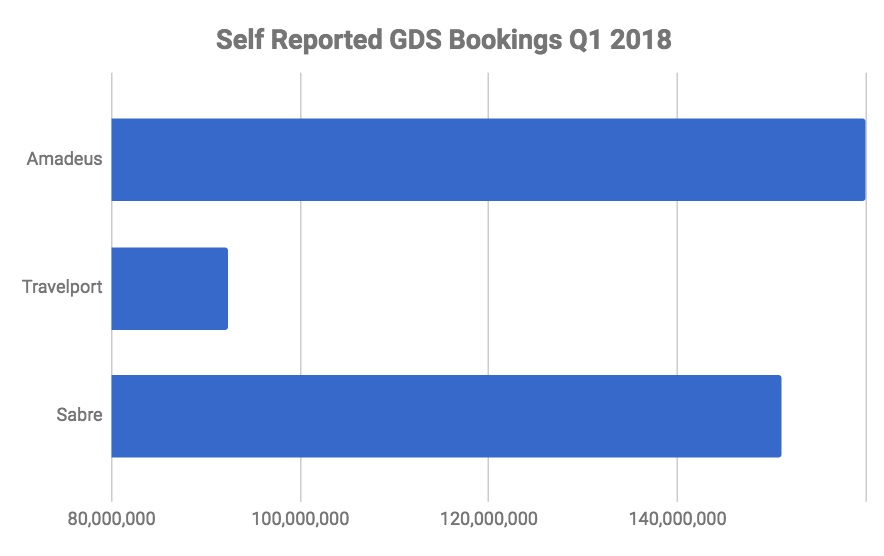 Using their self-reported Q1 numbers Amadeus is now at 40%, Sabre at 37% and Travelport at 23%. These numbers are directional as each GDS has its own approach to what counts and does not count as a segment.

It’s really a matter of time until the scale disadvantages will become acute enough to force a structural change. Is a GDS with less than 20% market share sustainable?   Amadeus Q1 EBITA # is essentially in line with Travelport’s top line revenue number!  Both competitors are making heavy investments in the future of their businesses yet still report Free Cash Flow numbers at multiples 2.8x, 6x that of Travelport. 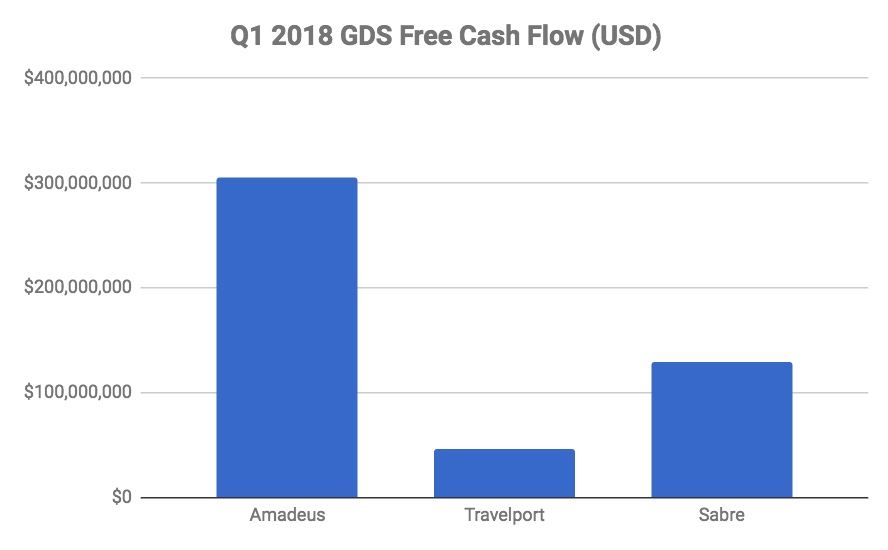 While Beyond Air (especially eNett) shows promise, linking it to a declining GDS business may not be the optimal way to maximise the value of the asset over time.

Looking ahead it’s hard to imagine Travelport turning the tide. It’s a scale game and competitors are executing well. Even from a distance both financial scale and financial performance look problematic. If the Travelport model was that of a young and fast disruptor the scale and performance issues could be ignored. Travelport is a traditional incumbent in a mature industry – the numbers say it all.  The likelihood of a structural change in the GDS business over the next 24 months is high.

Signs of change are already in the wind with Elliott Management Corp., a 12% owner in the business, tipped to be in talks to lead a leveraged buy out.

Looking ahead it’s hard to imagine Travelport turning the tide.

Up next – the wildcard

The untold wildcard in the macro GDS landscape story is TravelSky. This China-based GDS has all the scale advantages and more of any competitor. They also have a lock on what will be the worlds largest aviation market and what is already the worlds largest outbound market.

All the western GDS have courted Travelsky over the past 10 years – including Travelport. Travelport also recently hired Robert Bailey the former Abacus CEO as the chief strategy officer. Bailey led the charge for Abacus in trying to gain access to the China market for the regional GDS. He has spent a significant amount of time with Travelsky and CAAC leadership so this certainly creates the Travelsky path as one possible (if very unlikely) future for Travelport.

Subscribe now for more on Travelsky, Sabre, and Amadeus Q1 results and what they mean for the future of the distribution landscape in the coming weeks.

77% of travelers globally want to travel in the next year, with Europe reigning as…

The new battleground in travel retail

Travelport+: When simple is best

Four travel trends this summer as recovery is underway

Emirates A380 with premium economy to be delivered this year

EU could deny entry for over 2.5 million Brits from January